July is upon can. Can you believe it!?

Get ready for friends’ epic summer vacation photos, complaints over how hot it is and ice cream ad after ice cream ad, splattered all across your Facebook news feed. There may however be a few extra things you’ll begin to notice as your browse through Facebook this month.

1. Facebook are reportedly in the beginning stages of rolling out video ads in Messenger

A spokesperson for Facebook has announced that they are in the early stages of placing video ads in Messenger.

They said “we plan to roll this out gradually and thoughtfully” which matches Facebook’s previous statements about their intention to focus on the Facebook user experience. While a new advertising opportunity is great for advertisers, Facebook want to make sure such ads will enhance the average user’s experience, rather than ruin it.

2. Facebook is now allowing users to rate a brand’s customer service, after they’ve been fed one of theirs ads

If a person has clicked on an ad on Facebook, they can later rate the experience they have with that brand. If Facebook sees that numerous people are rating a brand poorly, that brand will get penalized by Facebook and may even be banned from advertising there.

This is, again, part of Facebook’s focus on making sure their users are having a positive experience on Facebook.

Where Can I Find This Feature?

When using Facebook on Desktop the first step would be to hit “Recent ad activity” in the bar to the left of the screen (as highlighted in red, in the image below). 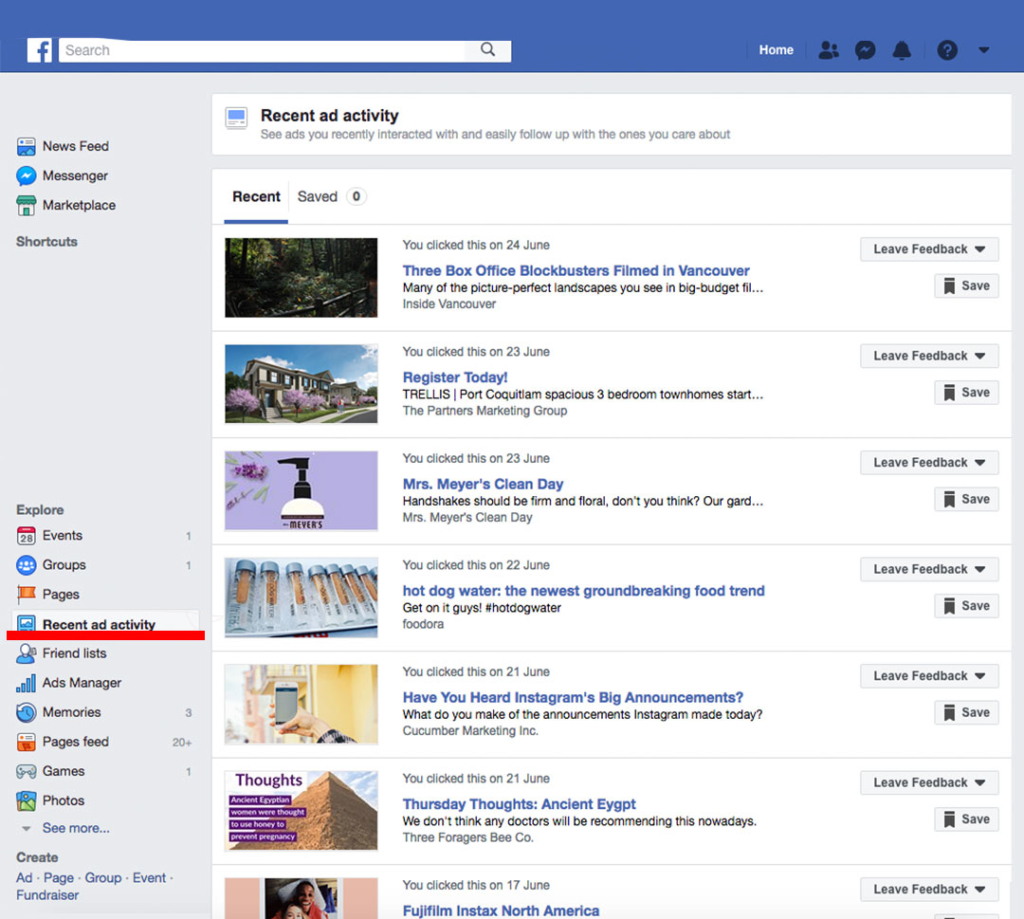 Then, you’ll be able to see all of the ads you’ve clicked on. With each listing is a “Leave feedback” button”. After pressing this, you can say whether you were satisfied, neutral, or unsatisfied with that company. Next you can give a reason why, and leave a comment.

This is important for advertisers to know, as if your customers are feeling they are not pleased with you, it could seriously impact your advertising strategy.

The feature, if fully rolled out, would allow users to control the content they see by selecting to not be shown content related to certain keywords. Marketing Land reports that the intention of the this tool is so that people can avoid being fed spoilers for their favourite sports, movies and TV shows. For instance, if somebody used the Keyword Snooze feature to block content for “Game of Thrones” they won’t get shown anything related to that phrase for 30 days.

For more on the latest social media news, sign up to our newsletter, or stop by our marketing agency for a chat with the team – we always have chocolate!