If you logged in to Facebook this morning you would have seen a new sight – five new options to “Like” a post describing how you feel about it. These five options include Haha, Wow, Sad, Angry and Love. This is an awesome feature for Facebook users worldwide, and give business owners a new way to gauge how users feel about their posts! Here’s the official statement from Mark Zuckerberg regarding the launch: 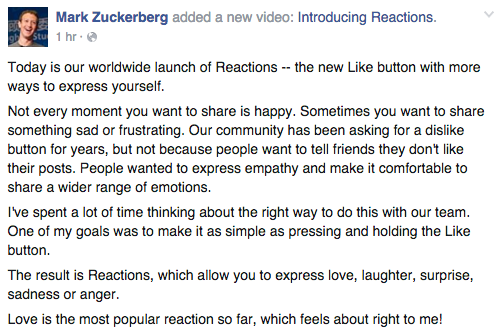 There’s a lot of marketing implications to this new feature, but today we’d like to shed light on the launch itself – why? Why now? And what should we expect from Facebook in the future?

What’s awesome about this new feature is how Facebook handled its long-running criticism of not having a “Dislike” button. As Mark pointed out in his post, this feature specifically addressed this issue and took it a step further. Every business has its criticisms, and good PR depends on how you handle them. If Facebook caved to its users and introduced Dislike years ago, they’d have a mess handling hurt feelings or potential cyber bullying issues. That’s not what the brand is all about.

On the other hand, if Facebook didn’t do anything to address the issue then they would essentially be ignoring the customer – something you never want to do. Facebook has managed its criticisms quite well with this move, adding a new way to engage without making the change mandatory (users can still choose to simply “Like” a post). What’s more, they chose their options very carefully -Haha (Happy), Wow (Surprise), Sad, Angry and Love. Note the lack of truly negative options (disgust, fear, dislike, etc).

Facebook’s brand works to “bring people together,” not “rip people apart,” so none of the above reactions actually show signs of disapproval of the content itself. It goes to show how well thought-out this move was!

So, why launch this in February of 2016? As Mark stated, the community has been asking for a Dislike button for years. Why launch this feature now?

Apart from the obvious explanation of “it takes time to do things right,” this move takes place right as Facebook is positioning itself to monopolize its user’s time. Can you think of a community that promote engaging content, using a reaction system to gauge content quality?

I bet that Facebook’s marketing plan has a list of deliverables to be launched in 2016, all of which cater to increasing user engagement and time on the site. It’s going to be fun watching Facebook’s strategy play out.

What do you think about Facebook reactions? Or Facebook’s strategy overall? Do you think reactions are going to make a difference in keeping users engaged on Facebook? Let us know on Facebook or visit our (Marketing) Greenhouse in downtown Vancouver! We love to talk social media. We always have chocolate.